Welcome to the parish church of St Michael and All Angels, Thornhill. You are in good company as there has been Christian worship on this site since Anglo-Saxon times.

Mentioned in the Domesday Book, this building is grade one listed and is included in Simon Jenkins' book “England’s Thousand Best Churches”.

We are situated on the B6117 just 2 miles South of Dewsbury and we serve 7,500 people in the Parish.

Although we are hugely proud of our historical significance, we recognise that it is both a duty and a joy to maintain the integrity of the past whilst accommodating the present and making room for the future. In the year 2000 the church was re-ordered in recognition of these thoughts as we installed a new kitchen and toilets, disabled facilities, an induction loop system, baby-changing facilities and generally a more adaptable system of furniture. Modern angels were etched into the glass doors of the new entrance lobby joining the impressive row of stained glass along the south side. The local school buried a time capsule at the west end of the church under the carved stone 'Be still and know'. In 2011-12 a new lighting and sound system were installed and most of the monuments in the church were conserved. The windows in the Savile Chapel were conserved and a new East Window in the chapel designed and made by Jonathan Cooke was installed.

The church is dedicated to St Michael and All Angels and stands on the south side of the Calder valley, two miles South of Dewsbury. There has been a church on the site since Anglo-Saxon times. Since the late l4th century its history has been closely linked with that of the important Savile family. The church is of interest both as an historic building, for the important monuments and outstanding medieval stained glass which it contains and for its important place in the community today. It is a Grade 1 Listed Building in the heart of the Thornhill Conservation area. It is listed in Simon Jenkins’ book “’s Thousand Best Churches” as a warm and friendly building.

The development of the church

The church is first mentioned in the Domesday Book of 1086, but the fragments of Anglo-Saxon memorials - crosses and a grave slab - indicate that there has been a church here since at least the 9th century.  Fragments of stones carved in the  and Early English styles mark rebuilding or extensions in the l2th  and l3th centuries, the oldest surviving parts of the church are the 15th-century tower, chancel and chancel chapels. Inscriptions on the stained glass windows give  precise dates for the chancel and the chapels. The Savile Chapel on the north was first built in 1447 and extended eastwards in 1493.  The South Chapel was built in 1491 and the chancel was remodelled, 'clerestoried and arched' by 1499.

The nave of the church, probably an Anglo-Saxon or Norman structure modified and enlarged in the 13th century, was pulled down in the l8th century. In 1777 the medieval nave was rebuilt as a 'preaching box', in a mixed gothic and Classical style. The dedication slab of the 1777 nave survives, as does a photograph of the nave. The Victorians condemned the 1777 nave as 'Churchwarden's Gothic' and 'in poor style'. It was rebuilt (with aisles again) in 1877-9 by the architect . The style of the architecture which he used was the 14th-century Decorated style; this was chosen because it was the one style not represented in the building or among the fragments of architectural stonework. Street, also added the present south porch and vestry, the latter projecting beyond the cast end of the church. The 20th century added a fine organ in the North Aisle with a detached console. 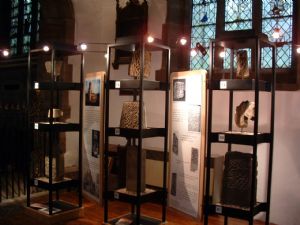 (Part of display of runic stones)

see link to Collingwood's work on these: http://www.huddersfield1.co.uk/huddersfield/tolson/angles_danes/thornhill.htm

The building was restored in 2001 with a new stone floor, a re-display of the runic stones, a new entrance lobby and new kitchen and toilets. In the  is a dedication slab with the carved words “Be still and know that I am God”. The new glazed entrance lobby has engraved glass representations of angels. Further conservation and roof repairs have continued until the present day (2013).